You are here: Home / Archives for admin

Cyclone Winston is expected to pass south of Suva after hitting Tonga twice. Residents of Suva tend to always be under the impression that cyclones only ever hit the north and west of Fiji’s group of islands.

The beautiful vuvale (family) at Outrigger Fiji Beach Resort have created a new website to showcase all the beautiful wedding facilities available to couples dreaming of a Fijian wedding. Click here to view all the Fiji Wedding Packages available including Chapel, Beach and Garden wedding ceremonies.

There is no official warning at this stage – just weather experts keeping an eye on the tropical low close to Fiji.

Presently, the storm brewing is considered  a category one cyclone. It is expected to hit the country by Saturday. Hopefully this will bring inclement weather only. Those in low lying areas are advised to move to higher ground in preparation for flooding in some areas of Fiji. Our prayers go out to Fijians as they face the threat of cyclonic weather – most notably flooding and torrential downpours.

“The confirmed assessment as of now is that a tropical cyclone will hit Fiji by Saturday, moving across the country and heading towards the South,” Waqaicelua said.

The AccuWeather.com Hurricane Center is keeping a close eye on another tropical low spinning immediately to the east of Fiji.

A tropical cyclone with its strength equal to that of a tropical storm is expected to take shape gradually as the low spins near Fiji through Thursday (local time) then crawls southeastward later in the week. 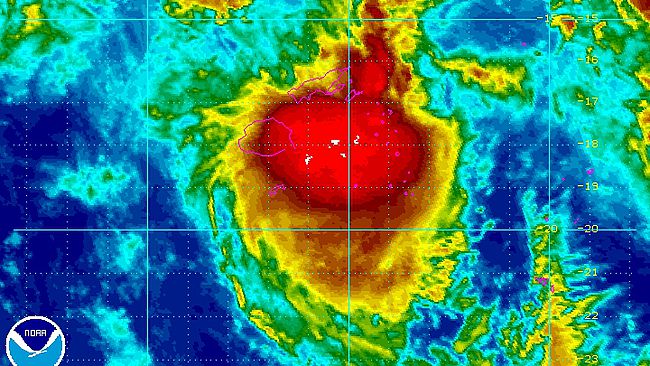 Due to the compact nature of the low, eastern parts of Fiji will be most at risk for experiencing flooding downpours.

The threat of flooding rain and damaging winds will then shift to Tonga this weekend as the low tracks southeastward.

This weekend is also when another tropical cyclone may begin forming south of the Solomon Islands.

Latest indications point toward this future tropical cyclone dropping southward through the Coral Sea next week and possibly becoming stronger than the low currently near Fiji.

AccuWeather.com meteorologists will be closely monitoring this area for potential impacts on eastern Australia later next week or the following weekend.

ALERT: Potential for formation of a tropical cyclone till 1200 UTC Friday 28th February, 2014:

A tropical disturbance 14F is located near 15.9S 174.6E 367km northwest of Nadi at 3PM today. It is
moving east-southeast at 15 knots. The potential for tropical cyclone formation from this disturbance
on Wednesday is Moderate, Thursday is High and on Friday is High.

is located near 18.2S 175.3E 233km west-southwest of Nadi at 3PM today. It is moving southeast at
10 knots. The potential for tropical cyclone formation from this disturbance on Wednesday is
Moderate, Thursday is High and on Friday is High.

Cyclone Evan made landfall as a powerful and dangerous Category Four across extreme western Viti Levu, Fiji. Preliminary damage reports are still streaming in. Lautoka may have been hit hardest with significant wind damage. The full extent of damage will not be known until later today. Furthermore, river levels are still rising throughout Viti Levu. Inland river flooding will be the greatest threat over the next 24 hours. We strongly encourage all residents to continue monitoring all of the latest warnings issued by the Fiji Meteorological Services. The Fiji Ministry of Information is also posting frequent updates via Facebook.

We have also made dozens of posts on our 28storms Facebook Page throughout landfall. Many viewers have had questions regarding the status of certain locations around the country. We have already verified that several resort areas have made it through the cyclone with only minor damage. Meanwhile, some resorts have been unable to post their status online, possibly due to the lack of telecommunications in some areas. In addition to our posts, several viewers have also helped one another by posting more information on the page. We will continue to do our best to keep you informed.

We hope that everyone tuning in to 28storms.com/cyclone over the past week has found our information useful. 28storms is an independent, grassroots operation being run by two meteorologists. We attempt to cover every significant weather event around the globe. As you can imagine, this often becomes a grueling process. If you would like to support our cause and further the operation of 28storms, please consider making a donation below. We appreciate each and every donation, no matter the figure. Thank you for following 28storms!

We think of and pray for all the beautiful people in the Fijian islands. The latest update is not a good one. Please refer below to a report and video compliments of www.28storms.com…

The center of Cyclone Evan is currently located just offshore the Western tip of Vanua Levu in Fiji. In addition to heavy rainfall and inland flooding, impacts include strong winds and coastal surge flooding (particularly along the Western portions of Vanua Levu and Viti Levu). At this time final preparations should have already been made and conditions are expected to rapidly deteriorate across portions of Viti Levu and the Yasawa Islands over the next 6-12 hours. Conditions should begin to improve for Vanua Levu over the next 6-12 hours and in 24 hours for the island of Viti Levu as Cyclone Evan continues to move towards the West-Southwest at 25 km/hr.

The eyewall of Cyclone Evan is clipping the northern and western coast of Viti Levu. This is the region of the cyclone where some of the strongest winds and highest storm surge are located. The peak intensity of the storm is likely reaching the coast at this very hour. All residents in this region are advised to remain in shelter until the storm passes. Stay tuned to our page for more updates.

Residents of Fiji are advised to make their final preparations within the next few hours before weather conditions rapidly deteriorate ahead of Cyclone Evan. Gale force winds are expected to overspread the islands later this evening and tonight. Although the eye of the storm is forecast to pass immediately north and west of the islands, the eastern side of the storm will still generate destructive winds and dangerous storm surge. The government of Fiji has provided a list of evacuation shelters, and you can find that list HERE.

There is presently a cyclone alert for the Fiji Islands – in particular the Mamanuca and Yasawa group.

Resorts in these Fiji island groups are advising guests to move from the island and find alternative accommodation in Denarau until the cyclone passes.

From our friends at Castaway Island, Fiji…

This morning the Yasawa and Mamanuca group of islands have been placed on Cyclone alert.

Severe Tropical Cyclone Evan may reach the Fiji Islands Monday 17th December. As a precaution we are currently assisting and urging all guests on island to move to Denarau hotels until the cyclone passes. We are also not accepting any new guests on island until the situation passes. If you are due to travel to Fiji in the next 4 days (Sat 15 Dec to Tue 18 Dec), please keep in contact with your airline/travel agent for further updates on the weather situation.

Stay safe Fiji. We are thinking of you.

For official updates and travel advice please go to the official Fiji Met Facebook page for the latest updates – https://www.facebook.com/pages/Fiji-Meteorological-Service/112621892096909

A TROPICAL CYCLONE ALERT REMAINS IN FORCE FOR VANUA LEVU, TAVEUNI AND THE NEARBY SMALLER ISLANDS AND NORTHERN LAU GROUP.

A STRONG WIND WARNING REMAINS IN FORCE FOR VANUA LEVU, TAVEUNI AND NEARBY SMALLER ISLANDS AND NORTHERN LAU GROUP.

Picture from Castaway Fiji’s Webcam as at 15 December, 2013.

The island also offers a “marry me for free” offer. All the happy couple need do is book a certain amount of rooms on the island and they receive a wedding worth of $2650++ for free.

In terms of tourism operations, things are completely back to normal after the recent Fiji floods.

It’s a wee cloudy today but the weather has been stunning!

If you’re planning a trip to Fiji there is no need to worry. In fact, the forever-smiling Fijians would love a visit from you! When things like this happen in Fiji it hits the country hard. Tourism is a major part of livelihood. Your visit to Fiji will help them get back to normal asap.